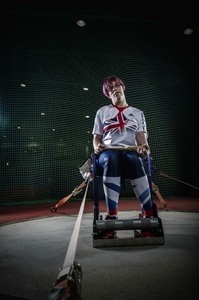 After being introduced to disabled sport at Victoria School and competing with the South West team, Maxine decided that she wanted to study sport. She moved to Treloar College in 2009 to study a Level 2 Diploma in Sport. At around this time, she also started to travel to CP sport competitions and was soon ranked as one of the best club throw athletes in the world. She was subsequently picked for the GB Elite training squad in Manchester.

From 2010, Maxine also studied Level 2 Business and a Level 3 Diploma in COPE, and retook GCSE English and Maths as she was keen to go on to college. During this time, Maxine also won the Welsh and English Championships in Club and Discus, and threw the qualifying distance for the Paralympics at the Chelmsford GP just six weeks before the Paralympic Games in London.

In 2012, Maxine was the last athlete to be picked for the GB squad and was travelling an average of 1000 miles a week for training and competing. She decided to move on from studying sport, so moved to Weymouth College to study a Level 2 Diploma in IT; she passed with a Distinction and was voted IT Student of the Year and Overall College Student of the Year.

Maxine was now ranked 4th in the World Rankings, but came 12th overall at London 2012 due to a problem that arose when her coaches forgot her custom clubs – she was forced to use a different design handle, impeding her performance.

In 2014, Maxine completed a Level 3 Diploma in IT with a Distinction and was picked for the GB squad for the Sainsbury’s Anniversary Games where she came 2nd in her class and 5th overall. During the Watford Harriers Open, Maxine injured her shoulder and was forced to pull out of the European Championships due to the constant pain.

Maxine continued her studies and in 2015 completed an Extended Level 3 Diploma with a Distinction. Her consultant informed her that she required an operation as she was dislocating her shoulder every time she threw. She was told that if she could stand the pain, she could throw for GB at the World Junior Games and they would operate three days later. Following pain relief and lots of tape, Maxine won the Gold with her first throw and immediately travelled to London for her operation. Sadly, the pain continued and Maxine has been unable to compete since. She had her third operation in May of 2017.

From 2015, Maxine moved to Southampton Solent University to study Web Design and Development. She loves the uni life.

Since hurting her shoulder in 2014, part of Maxine’s physio has been throwing underarm. This has resulted in Maxine taking up Boccia; she has found success through this, as she won Bronze at the Heathcote Cup and came 9th in the BE Cup in Sheffield. She was also selected for the Scorpions squad in Guilford.

Maxine has stopped competing for the time being as she is expecting a further operation. Hopefully, she will overcome her shoulder problems and be competing in the sports she loves again soon.