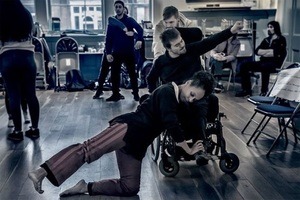 Since leaving VEC in July 2013, David has had a variety of amazing experiences. He has travelled to Australia twice to see ex-VEC Gappers and relatives. He has also joined and is still a part of an international arts project called ‘The Complete Freedom of Truth’. This uses creative arts as a tool for unity and acceptance with young participants from across Europe.

In 2015, he went to Bosnia for two weeks creating circus and street theatre and music. Following the ‘Seen but Seldom Heard’ project he participated in at Victoria, he worked with Bournemouth University, and through them was invited by ITV Meridian to make a film.

‘Don’t Write Me Off’ aired in October 2014. This also allowed David to produce a poetry book, and he started performing his poetry at open mic sessions at Freeway Poets in Bournemouth. You can still see him there regularly.

In September 2015, David auditioned to join the Graeae Theatre Company in London. He completed a 6-month theatre training programme there, culminating in a performance of ‘Stepping Stones’ at the Soho Theatre London.

Since then, David has continued to work with Graeae and Diversity, and most recently has been working as a Creative Assistant with ‘Ramps on the Moon’ Production Company for a new version of the musical ‘Tommy’.

He continues to enjoy his work and looks forward to working on his new show. He is extremely proud to be helping affect change in attitudes towards disability across the theatre arts industry.