AFC Bournemouth’s Tyrone Mings and ‘Kick It Out’ visit VEC 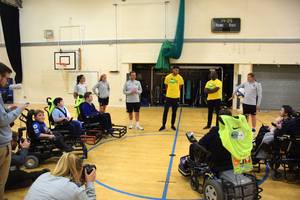 AFC Bournemouth defender Tyrone Mings, Paul Mortimer from ‘Kick It Out’ and AFC Bournemouth’s Community Sports Trust team visited Victoria as part of their equality and diversity in sport initiative. ‘Kick It Out’ is football’s equality and inclusion organisation, who work throughout the football, educational and community sectors to challenge discrimination, encourage inclusive practices and campaign for positive change. The day’s focus was inclusion and the promotion of disability sports. Dorset’s power chair football team, The Wessex Warriors who are based at Victoria, demonstrated their skills in a very competitive match while Paul Mortimer and Head of AFC Bournemouth’s Community Sports Trust Steve Cuss took to power chairs to try the game for themselves. Part way through their game the players were delighted by a visit from AFC Bournemouth defender Tyrone Mings. Tyrone met the players and chatted about his journey into football before trying out one of the chairs for himself. Tyrone was a fantastic ambassador for football and AFC Bournemouth, staying on afterwards for photos and to sign autographs.