Day three of the Stoke Mandeville National Junior Games, and Simon Higgins has been in touch to fill us in on our students’ amazing accomplishments:

We have had some fantastic achievements over the last 24 hours:

Pool – Esther and Elisha have both won their pool semi-finals and now have to face each other in the final.

Boccia – Sophie has won her first two matches with some confident decision and tactical play. Regan has continued his winning streak and goes from strength to strength with his attacking play. Charlotte has qualified for the finals this morning with some fantastic shots. Tyler won two out of three matches and showed brilliant concentration as well as unerring enthusiasm. Torin and Esther both played evening matches and had some superb victories against strong opposition.

Polybat – Amar has been playing some great matches and has reached the semi-finals; he is naturally delighted by his achievements.

Shooting – Ryan has displayed brilliant calmness under pressure to score an amazing 96/100 and was leading the event.

Zone Hockey – Our teams dominated the evening schedule and came out winners in all of their matches. There was an abundance of team play, with great goals and defending in equal measure. Their play has been complimented by the professional coaches.

Archery – Students have certainly shown they have the eye for a bullseye! All students have constantly hit the target on numerous occasions.

There has been such a fantastic attitude and team spirit displayed by our students. They have all represented Victoria with pride.

Well done to every one of our fantastic sporting students! 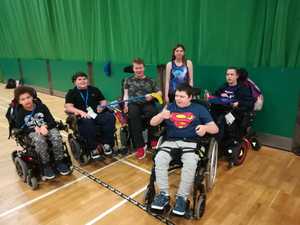 The FA comes to Victoria