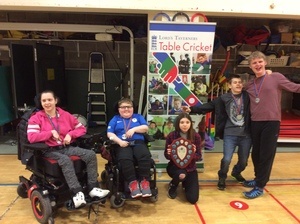 We are very pleased to announce that our table cricketers were victorious in both of their matches yesterday and qualified to represent Dorset in the South-West Finals later in April. The team batted superbly and scored over 300 runs in their final match and this was backed up with some alert fielding to enable the team to be victorious. All of the team played their part but Elisha captained the team with calm assurance and ensured everyone was focussed and ready for action. Well done on becoming Dorset Champions, we are really proud of their performance.