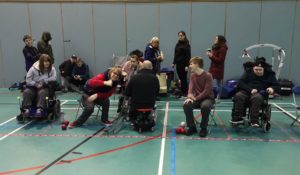 Two teams were in action yesterday in the South West England Boccia Finals. After an early start and a two-hour journey, they had the opportunity for some practice before the competition started in earnest. Both teams were drawn into competitive groups and soon got into their rhythm and won their first matches. Our students played really well with some excellent attacking and defending shots.
Overall both teams won two, lost three matches each. They finished second in their groups which means we will not be progressing to Sheffield for the National Finals. However, taking the positives, all students competed at an extremely high standard and should be thoroughly proud of their achievements. Huge thanks to Simon, Martin and all supporting staff.