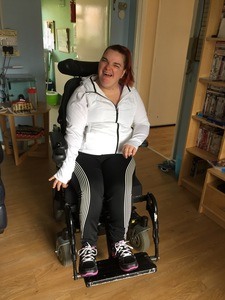 Gemma left Victoria in the summer of 2006 and started studying at Treloar College the following September. She studied there for 3 years, where she passed GCSE Maths and English, gained a Level 2 qualification in ICT and a BTEC in Travel & Tourism.

In her final year at Treloar, Gemma lived independently at Campbell Court, the college’s independence community. Here, she developed a range of skills and routines that allowed her to live by herself. Upon returning home from college, Gemma was keen to carry on living independently, and soon moved in to her own independence flat in Bournemouth. She co-ordinates her own care team and manages her own finances.

Gemma started studying BTEC IT at Bournemouth College, completing the course in the summer of 2011.

Gemma has a very active and busy life, as demonstrated through her commitment to the Duke of Edinburgh Award scheme, where she successfully completed her Silver Award. She is also passionate about sports, and has been an active member of the Wessex Warriors Powerchair football team. As well as this, she has taken part in the Race For Life in her walking frame, raising several hundreds of pounds for the charity.

Gemma is also the founder of Victoria Community Boccia Club, a club that allows disabled people who have passed school age to train and play Boccia. She hopes to one day compete for Team GB in Boccia; a dream that she is well on the way towards, having qualified for Nationals in 2017.

She started working as a volunteer in the VEC Sports Department in 2012 and is still a member of the team. She is also working towards a degree in Sport, Fitness and Coaching through the Open University.

She is extremely proud of all that she achieved whilst a student at VEC, and hopes that other students with severe disabilities see that independence and an active life is possible in spite of all of life’s challenges. Keep smiling!